you don’t have to go home, but you can’t stay here

November 1, 2018 by Team NDGOP in Heidi Heitkamp
Moments after news broke that her state party is engaging in voter suppression tactics, Heidi Heitkamp began her farewell tour by tying herself to the Obama administration and attacking President Trump’s agenda.
While Heidi Heitkamp flies in out-of-state liberals and out-of-state staff, Kevin Cramer continues to receive support from actual North Dakotans, many of whom live in the same cities Heidi is visiting today:

“The Affordable Care Act has been a disastrous for my wife and I.  For the last several years we spent over $30,000 a year to purchase healthcare. Any plan the Republicans can come up with has got to be better.. What the hell do we have to lose.”- Barry Argabright, Fargo

“Waters of the U.S. Rule (WOTUS) has been disastrous for farmers interfering with our ability to manage our land and create economic opportunity.  Kevin has consistently opposed WOTUS as an unconstitutional power grab by the federal government.  We need that kind of a Senator in DC representing North Dakota’s interests.” – Ryan Wanzek, Jamestown farmer

“Heidi and Conrad’s recent ad blaming Rep. Cramer for the national debt is unbelievably dishonest.  On January 20, 2009, when Obama was sworn in, the debt was $10.626 trillion. On January 20, 2017, when he left, it was $19.947 trillion. That’s why most people say Obama added $9 trillion to the debt, more than any other president.  Heidi supported this reckless growth in debt.” – Sylvan Melroe, Fargo Veteran

“Kevin’s records proves he supports legal and sensible immigrations. Heidi has voted for chaos and anarchy at the border. American’s are not against immigration, we are simply against unregulated and illegal immigration. No society can survive thousands upon thousands of people flooding their borders with no existing support system. The result is anarchy, crime and exhaustion of societal resources. This should not be a Democrat issue or a Republican issue, this is an American issue.” – Rockne Earles, Oriska retired businessman

“Heidi Heitkamp has made it clear her real home is in Washington DC, where she votes with Chuck Schumer and national liberals against tax cuts, conservative judges, banning late-term abortion or cracking down on illegal immigration,” said North Dakota Republican Party Communications Director Jake Wilkins. “North Dakotans are ready to tell Heitkamp to go home by voting for Kevin Cramer this November.”

Heidi Heitkamp gave her state party $3 million, and they are using it to depress voter turnout in North Dakota.

As Rob Port notes in the story below, the North Dakota Democrat-NPL party is telling people their hunting licenses will be revoked if they vote here.
After all their manufactured controversy that’s garnered national media attention, it’s clear Heidi Heitkamp’s party only cares about winning an election, not helping people vote.
In Case You Missed It…
North Dakota Democrats Promote Message Telling Hunters They May Lose Their Licenses if They Vote
Rob Port
11.1.18

A reader alerted me to this curious message on Facebook which tells voters they may lose their hunting licenses in other states if they vote: 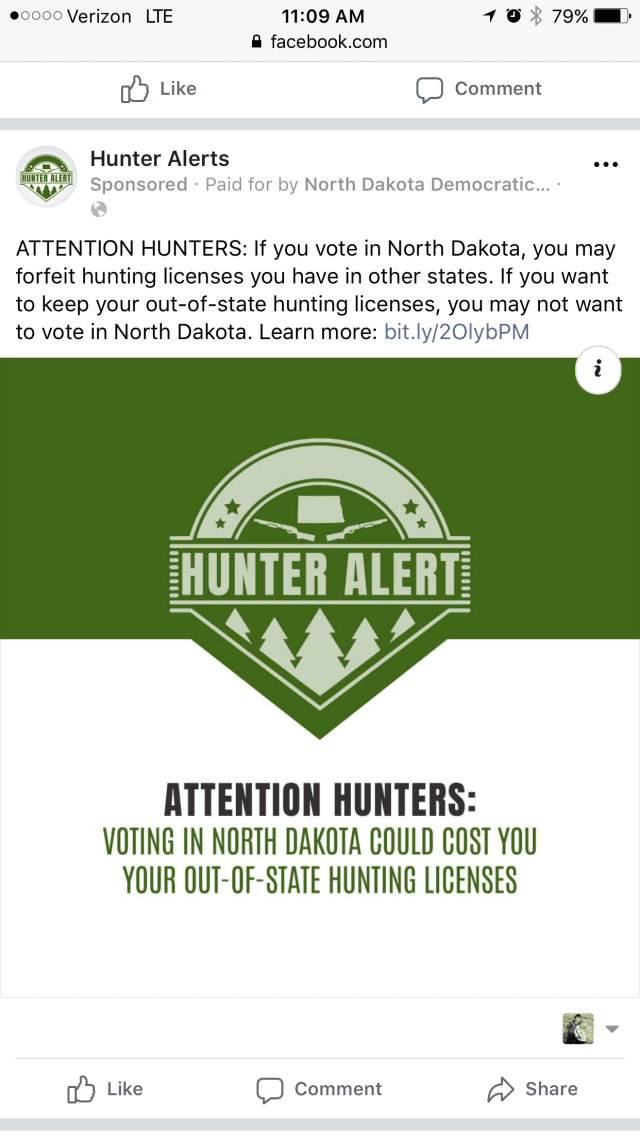 Facebook keeps a searchable database of the political ads which run on their platform. I searched for this particular ad to verify it, and it’s real. Paid for by the North Dakota Democratic-NPL: 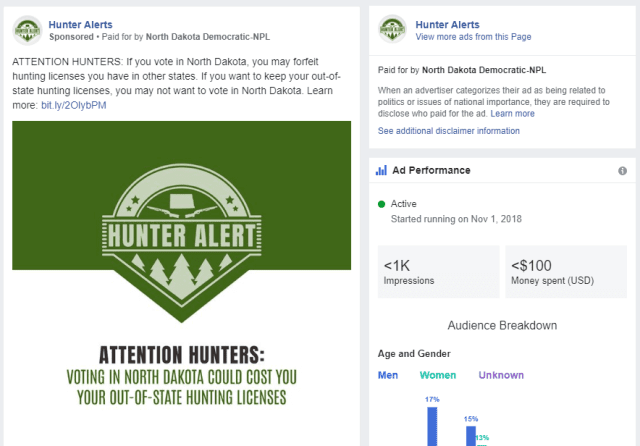 If you click on the link in the ad, it takes you to a landing page on the North Democratic Party’s website which contains this message:

The ad is promoting a Facebook Page titled “Hunter Alert,” though at this point there is no content there other than some logos.

I reached out to Democrats about the ad, asking what facts they’re basing this claim that hunters may lose their licenses for voting on. The Democrats typically don’t respond to my inquiries, however.

I’ve been writing about politics for more than 15 years now, and this is the first time I’ve ever heard of something like this.

I contacted Secretary of State Al Jaeger and asked if he’d ever heard of this claim before. “No,” he told me. “We’re not involved at all in the requirements for getting a hunting license. A question like what you have needs to be directed to the Game & Fish Department. I doubt that there’s any connection.”

“We’ve never heard of that, Randy Meissner, the licensing manager for North Dakota Game & Fish, told me when I contacted him and read him the text of the ad. I sent him the links and screenshots for the ad and he said he was going to run the claim by his administration.

This ad comes at a time when North Dakota Democrats are accusing the Republican legislative majority in the state of trying to suppress Native American votes with voter ID requirements.

MADE UP MOMENTUM: 51 problems and her campaign is one

Their fake-it-till-you-make-it strategy isn’t working, as a brand new poll out tonight shows Heidi Heitkamp losing a majority of her constituents to Kevin Cramer:

LET’S BE CLEAR: Cramer’s lead is no fluke, and Heidi Heitkamp’s deficit is well deserved.
As CNN explains in the story below, while she was already on the brink of defeat, Heitkamp opposed her constituents by voting against Justice Kavanaugh, then outed victims of sexual assault without their consent in a political attack ad. North Dakotans know this isn’t a campaign that deserves to win:
Click Here to Watch

October 31, 2018 by Team NDGOP in Heidi Heitkamp
The North Dakota Republican Party did not actually obtain Heidi Heitkamp’s personal copy of her upcoming bus tour, but if we did, we think it would look something like this…

My “Pretend North Dakota is Still My Home” Tour

10:30 AM – Ask Joe Biden to not say something bad during the rally.

11:30 AM – Apologize for whatever Joe Biden says during the rally.

11:00 AM – Tell tribes how easy it is to vote in North Dakota, despite what my campaign says.

4:15 PM – Talk to Kylie Oversen about our mutual support for Hillary Clinton.

8:45 AM – Let my chief of staff yell at reporters who don’t write friendly stories.

11:00 AM – Find more unpopular former politicians to be campaign surrogates.

5:45 PM – Hope voters forget I did nothing during the DAPL protests.

10:15 AM – Let my official office keep attacking a veteran.

2:45 PM – Knock the doors of reliable Republicans because our data isn’t very good.

5:45 PM – Pledge to repeal the tax cuts since they’re working so poorly in North Dakota (I think?).

8:45 AM – Resist the urge to discuss repeated abortion flip-flops.

11:30 AM – Pretend to be a moderate to fool the western, conservative part of the state.

4:15 PM – Pretend to be a liberal to fool the eastern, moderate part of the state.

Heidi Heitkamp’s brother and de-facto campaign spokesman Joel continued his auditions for a spot on MSNBC this morning, and it’s safe to say it didn’t go well.

First, when forced to answer for Heidi Heitkamp outing sexual assault victims without their consent, Joel said people had accepted her apology and moved on:

REALITY CHECK: Victims of Heitkamp said her actions “downright ruined our lives.” Many of the victims didn’t hear from Heidi, and the ones who did said a mere phone call was insufficient.
But Joel didn’t stop there. When asked about his sister being down in the polls, Joel bragged about having access to her internal polling and lashed out at MSNBC’s Steve Kornacki:

Kornacki, for his part, took the high road and called it like it is: team Heitkamp just doesn’t want to admit they’re behind.

Joel’s personal attacks and outlandish behavior come as no surprise to those who know him, since this is the same man who called Trump a racist for helping hurricane victims and released the divorce papers of a radio show host with a bigger platform than his.
LET’S BE CLEAR:  Though it’s clearly not going well, Joel Heitkamp is going on MSNBC to look for a job because he expects Heidi to lose. If he plans to keep making comments like these, Heidi should start looking, too.
###
Read More